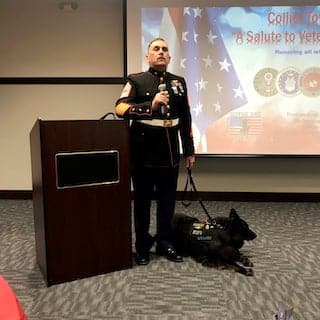 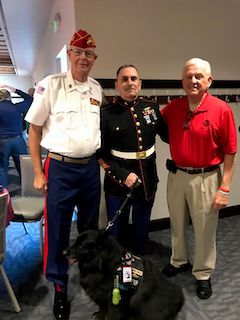 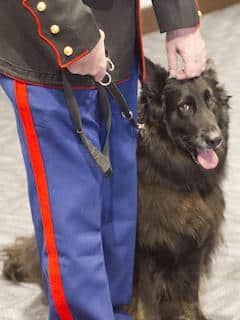 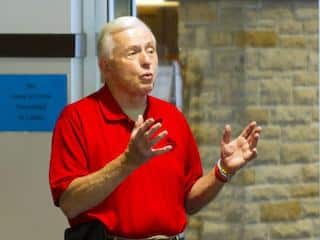 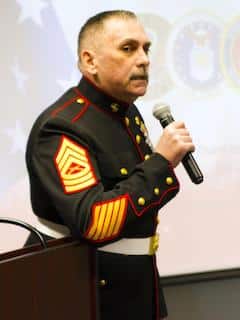 In the article by Harry Funk, Recipient Craig talks about the many changes Service Dog Foxy has made in his life – both physically and mentally. He states:

“I was just ready to give up completely. I was done,” U.S. Marine Corps veteran Craig said. The Mt. Lebanon resident had gone through multiple surgeries, gained weight, become reclusive, alienated his family. As a result, he seriously contemplated following the path of the estimated 22 veterans who take their lives each day in the United States. Foxy accompanies Craig Hodgkins everywhere. Then he met Foxy, his constant companion provided to him at no charge by Guardian Angels Medical Service Dogs Inc.

“Since I’ve had Foxy, I’ve lost 46 pounds from going out and doing walks with her,” he said, adding he now fits into his master sergeant’s uniform for the first time in a decade. He wore the uniform as one of the keynote speakers at Collier Township’s first-ever Salute to Veterans Brunch, held Wednesday at the township community center. Joining him was Bill Jeffcoat, president of Life Changing Service Dogs for Veterans, a Pittsburgh-area volunteer group that supports Florida-based Guardian Angels.”

About the Author: Christine Patrick