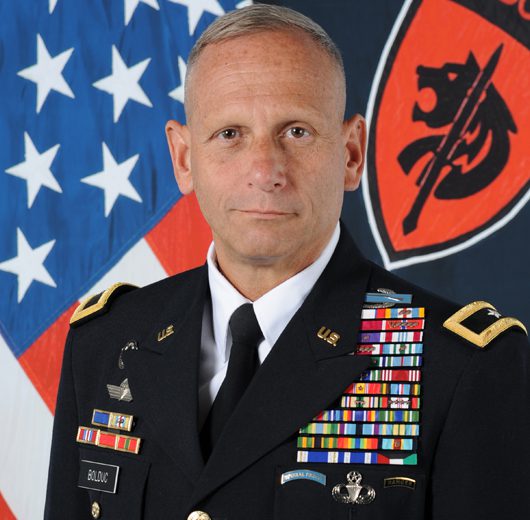 After 32 years of active duty service to his country in which he received 2 awards for valor, 5 Bronze Star medals, 2 Purple Hearts, led ten deployments, and survived both a bomb blast, numerous fire fights, and a helicopter crash, General Donald C. Bolduc, former Commander, Special Operations Command Africa, is hanging up his fatigues to take on perhaps his most important and challenging mission of advocating for the treatment and shedding the stigma of PTSD and mental health problems, both from within the US military as well as the general public. The general started his career as Private Bolduc on June 29, 1981, exactly 36 years before his final change of command. After the terrorist attacks of 9/11, then-Major Bolduc led one of the first groups into Afghanistan, riding on horseback to take control of the southern Afghanistan region from Taliban rule. One of the few survivors of a 2,000-pound bomb that was inadvertently targeted on their own position by friendly fire in December 2001, Bolduc refused to leave the battlefield and continued to take on his next objective. He was later awarded his first of several combat valor awards and a Purple Heart for his injuries. From 2011 through 2012 as Combined Joint Special Operations Task Force commander, he was credited with the creation of the “Village Stability Operations” concept, a bottom-up stability effort in rural areas and villages in Afghanistan which undermined insurgent influence and control by the Taliban and ensured the stabilization of large areas of the war-torn country through Afghan Local Police. In his role as Brigadier General, Bolduc was responsible for the full spectrum of Special Operations activities across the African continent and the more than 1,500 U.S. military, interagency and international military personnel operating in 28 countries throughout Africa and Europe. SOCAFRICA is designated as U.S. Africa Command’s lead counter-Violent Extremist Organizations (VEO) operations component. Prior to this, he served on the Joint Staff in the Office of Secretary of Defense and as the Aide to the Secretary of the Army at the Pentagon. His other awards and decorations include the Defense Service Medal, Defense Superior Service Medal, Legion of Merit, Bronze Star Medal with Valor Device, Army Commendation Medal with Valor Device, numerous foreign awards, Combat Infantryman Badge, Expert Infantryman Badge, Master Parachutist Badge, Air Assault Badge, Special Forces Tab, and Ranger Tab. Beyond his various positions and awards, nothing brings more meaning to Bolduc’s service than his latest mission to combat the stigmas around post-traumatic stress disorder (PTSD). As one of the few military officers, and, at the time, the only active duty general officer on record, to openly discuss his own struggles with PTS, Bolduc has used his leadership position to change the conversation to one of understanding and acceptance through his own experiences. Dubbed “Captain America” and “Everyone’s General” by his fellow officers and soldiers, Bolduc always put country first, and now looks to continue his service off the battlefield sharing his leadership mantra of “Mission, People, Family” and his personal experiences with mental health to educate others. He has been married to Sharon M. Bolduc for 29 years and they have three sons Joshua, Zachary, and Matthew, as well as, three grandchildren Little “J “, Hadley and Hannah.