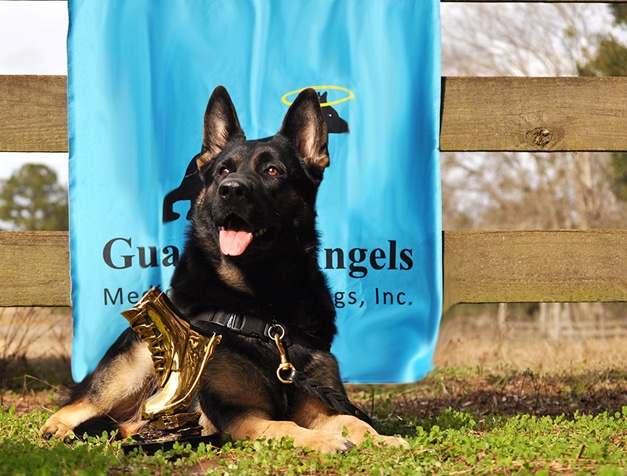 We’ve just received the exciting news that we’ve been nominated for a VETTY Award by the Academy of United States Veterans (AUSV)!

Guardian Angels Medical Service Dogs is honored to be named a Finalist for the 2020 VETTY® Award. 2020 will mark our third consecutive year reaching the finalist stage of this nationwide competition. Here’s a little on our history with the award:

But we need your help!

The first round of voting was decided by AUSV’s voting members, where they selected Guardian Angels and two other nominees as finalists. This final round of the competition is open to public vote beginning today and running through December 18, 2019.

Will you take just a moment today to click the link and give us a Vote?

We’re up against some very powerful competition, and hope that your support can put us over the top to our 2nd VETTY win in three years!

Read the full text of our entry..

According to the U.S. Department of Veterans Affairs, suicide is now the 10thleading cause of death in the United States. In fact, from 2005 to 2016, the veteran suicide rate increased 25.9%, and the suicide rate amongst veterans was 1.5 times greater for veterans than non-veterans.

There is strong evidence, that among Veterans who experienced combat trauma, the highest relative suicide risk is observed in those who were wounded multiple times and/or hospitalized for a wound. This suggests that the intensity of the combat trauma, and the number of times it occurred, may influence suicide risk in Veterans.

There is also rising concern in the first-responder community, as a recent study by the Ruderman Foundation found rising suicide rates in our first responder community, now rising to 20% higher than the rates of civilian suicide. In 2017, more than 240 active duty police and fire personnel committed suicide. The Ruderman study concluded that PTSD was the primary culprit in first-responder suicides.

More shocking still, is that the rate of suicide in the civilian community is at a 50-year high. In fact, the national suicide rate increased a staggering 33% between 1999 and 2017, according to the CDC’s National Vital Statistics System data. Beyond our veteran community, our organization has paired people from all walks of life with these life-changing service dogs; including high school shooting victims, retired police and fire fighters, correction officers who have survived riots and first responders from the Oklahoma City bombing.

Guardian Angels Medical Service Dogs has been waging a battle against PTSD and other disabilities that lead to suicide ideation since 2010. By donating nearly 300 individually trained medical service dogs, for various disabilities, most of which include PTSD, our dogs can detect and alert to rising anxiety and stress in their recipients, before it can reach critical levels, and react immediately to calm and re-focus their recipient on them, instead of their rising anxiety. They alert recipients, and gently awake them from night terrors, letting them fall back into a more restful sleep. This avoids the downward spiral that can come from sleep deprivation.

With their Service Dog at their side, our recipients report reduction or elimination of medication under their Doctors care. Beyond the recipient, this begins to change the lives of their family members as well. Many reports and stories are now being published on inter-generational PTSD. By letting the recipient re-engage with family and friends, this greatly reduces the instances of inter-generational PTSD’s potential for effecting the lives of their children.

Our organization has built a framework of assistance around our recipients that includes online private groups, designed to be a place of comfort and comradery 24/7 for our recipients across 22 states who may need a place to belong, feel safe, and have others who immediately understand and share in their experience.  Our Director of Recipient Relations has a master’s degree in human services, with a specialty in social and community services; and leads quarterly follow-up to all recipients. We have staff on-call to respond to emergencies 24/7/365, plus a volunteer psychiatrist that consults as needed. Beyond this, our organization gives presentations nationwide, bringing awareness and attention to the alarming levels of suicide in our veteran, first-responder and civilian populations.

Because of this work, and the extraordinary efforts that go into training these dogs to meet the specific needs of each individual recipient – the divorce rate in our veteran recipients drops from up to 95% above the national average, to less than 1%. We have experienced ZERO suicides to date once a recipient is paired with one of our service dogs. 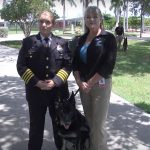 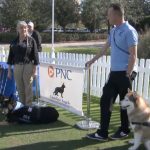