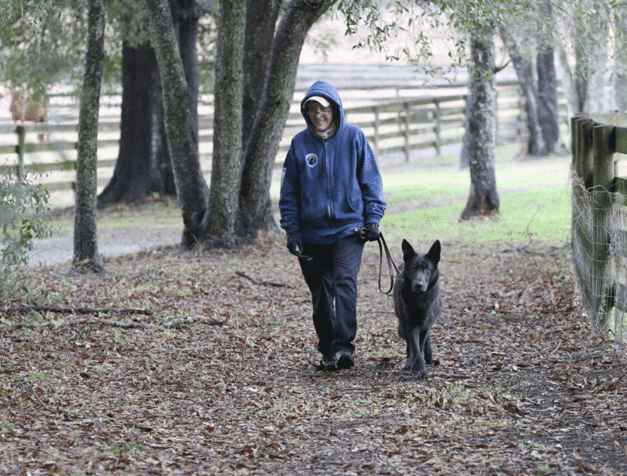 Mara Carruthers goes for a walk on a dreary, rainy day with Allie, a two-year-old German Shepherd who just gave birth to 7 puppies, at Guardian Angels Medical Service Dogs in Williston on February 8. [Bruce Ackerman/Ocala Gazette] 2022.

Linda Lorie doubts she’d be alive today had it not been for the quick action of her service dog, Grant. Lorie was going up a set of concrete steps that had metal edges when she lost her balance, missed the handrail, and toppled backward. In a split second, Grant rushed beneath her and braced her fall.

“He saved my life that day,” said Lorie. “I wound up with a cast on my ankle for a while, but I literally wouldn’t be here today if it weren’t for him.”

Bred and trained by Guardian Angel Medical Service Dogs (GAMSD) in Williston, Grant received the organization’s “Hero of the Year” award in 2014 for his act of heroism.

At the time of Lorie’s fall, Grant was almost two years old and had recently completed his training. Lorie was paired with him because she suffered from balance issues and from post-traumatic stress disorder related to severe physical and mental abuse when she was a child. Now 72, Lorie said her German shepherd service dog has saved her life several more times when he alerted her to heart and blood pressure problems, and again when his alert led to a diagnosis of cancer.

“These dogs are trained to hone in on those things,” Lorie said. “The trainers teach you to listen to your dog because almost everything they do is a communication of some kind.”

GAMSD is a 501(c) (3) organization founded in May 2010 by Carol Borden, an award winner in her own right, having been named WIPIN (Women in the Pet Industry Network) Corporate Woman of the Year in 2018.

Since its beginning, the organization has paired more than 380 dogs with recipients, said Mary Jo Brandt, chief operations officer for GAMSD, adding that training the animal costs an average of $25,000, but the recipient receives the dog free of charge.

“That’s where donations come in,” said Brandt. “Donors sponsor the dogs and that’s how we’re able to donate them to the recipients.”

For long-distance recipients, donations also help to cover airfare, rental cars, and hotel charges for 10 days, so they can work with their dog before taking the animal home, Brandt said.

GAMSD breeds German shepherds of Czech descent; however, the trainers also take on rescue dogs of different breeds that show an ability to work with people. Brandt noted that a lot of police departments use German shepherds, “Because they have an incredibly high work ethic and they’re always on the alert, even when they look like they’re sleeping,” she said.

“(German shepherds) mature very quickly,” Brandt added. “We start training at about four weeks old, and in about a year-and-a-half they are able to be paired off and start working. A full mobility dog can open and close doors, turn lights on and off, pick up dropped items and get food out of the refrigerator for you.”

The majority of the organization’s recipients suffer from PTSD, Brandt said. Dogs are trained to respond to a variety of physiological needs as well, including diabetic issues, seizures, and mobility/balance problems. GAMSD does not train guide dogs. 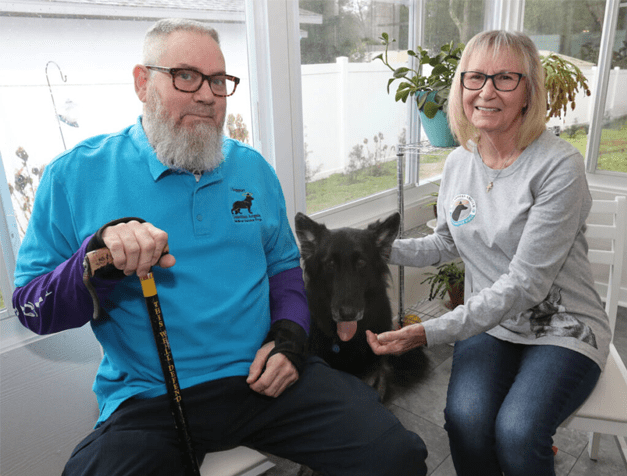 “I’m just so passionate over what we do here,” said Brandt. “For me, it’s because my father was paired with a service dog and I was able to see an immediate change in his personality and life. To be able to see that as a volunteer, and now as a staff member, I get to see the work that we do makes a difference.”

Currently, the Williston campus pairs dog with recipients in 30 states and the District of Columbia. The purchase of 102 acres near Pittsburgh, Pennsylvania, has allowed for the construction of a second campus, Brandt said. In addition to federal criteria that require the recipient to be declared permanently disabled, the organization also requires that dog owners be physically, cognitively, and financially able to care for their animals.

There are many opportunities for volunteers to get involved, from office work to grounds keeping, to fundraising, said Brandt. A favorite among volunteers is Saturday’s “Puppy Huggers,” when adults and children come out and socialize with the dogs.

Staff member Chris Weber can personally relate to people who receive a service dog. A traumatic brain injury survivor, Weber was injured in a car accident about six years ago. He couldn’t return to his former job but found a new purpose when he came to work at GAMSD.

“What helps me the most at my work is knowing what our recipients are going through,” said Weber. “Not everyone is blessed to the level I have, but knowing what I’m doing that day or that week, somebody is going to have their life turned around.”

As GAMSD’s development project administrator, Weber also helps with fundraising and public speaking events. But during his first demonstration with a service dog, he suddenly had an anxiety attack.

“I was having heart palpitations,” Weber recalled. “The dog was actually alerting to me. He came up to me, whining, and he sat next to my side. He put all his weight against my leg and kept nudging my hand. The crowd couldn’t tell, but I knew it.”

The actual pairing of recipients with a service dog usually falls to Maranda Jacob, the organization’s national recipient relations director.

Applicants ultimately meet with the trainers and staff to make sure they are paired with the right dog.

“It’s not an exact science, but it works very well,” said Jacob. “Every now and then we get one that doesn’t match. We have dogs in various stages of training. Sometimes a dog might look right for a person but he’s not ready yet. We try to make it right with a Plan B dog.”

According to Chief Administrative Officer Chris Ann Phillips, recipients receive their dogs free of charge, thanks to federal and state grants, corporate sponsorships, and individual donations. Phillips and her dog, Petro, have joined other staff members for fund-raising demonstrations at businesses, schools, churches, and community events.

“I retired from PNC Bank, one of the largest supporters of Guardian Angels,” said Phillips. “I am a Marine Corps vet with a disability and this is where I need to be.” 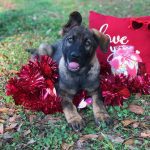 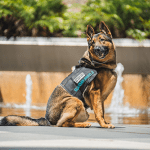 NextCan I Train a Service Dog Myself?