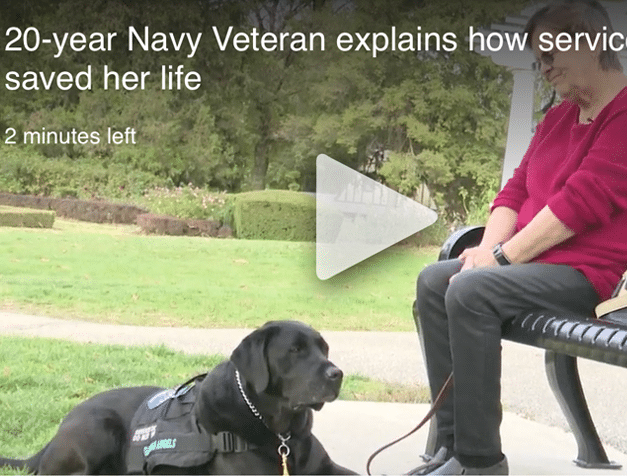 Karen Louise O’Neal, is a Navy veteran who served her country for 20 years. From 1973 to 1993, she served an EMT. After her stint in the military, she was diagnosed with PTSD, anxiety and depression because of events she witnessed.   “Of course, being part of the ambulance crew, I saw a lot of gruesome injuries,” O’Neal said. “Also, when I was in San Diego, there was a PSA plane that crashed in San Diego with a smaller plane I think there were 163 lives lost in that and it stuck with me for a long time.”  While still serving, O’Neal said she was able to push those traumatic events to the back of her mind. When she retired, those memories started to resurface.  Before going to counseling, she struggled with rational and irrational fears.

“I would fear that something would happen to our daughter when she went outside,” she said. “I would hide in the doorway and keep an eye on her. I could only go as far as the mailbox and that was it. I became a hermit, I couldn’t go out to do grocery shopping, the pet store, whatever we needed to do, I withdrawn from that.” At her lowest, she decided to seek counseling. Her doctor suggested that she get a medical service dog. Taking the advice, O’Neal applied for a medical dog at Guardian Angles Medical Service Dogs; a service dog organization that raise, train and pair medical service dogs to people with permanent visible and invisible disabilities. Approximately 95% of the recipients for Guardian Angels are veterans.

According to Guardian Angles’ Chief Operating Officer, Mary Jo Brandt, many donors choose to donate dogs their dogs to aide veterans and first responders start a new normal.  “We just have a passion for our veterans for people who go out there and do everything they can to keep our country safe. This is our way to give back,” Brandt said. O’Neal has found a new friend with the help of Brandt Guardian Angels: Patton, a 5-year-old English Box Head Black Lab. Patton is known to help wake O’Neal when she suffers from night terrors.

“Like they say in the military, he got my sixth, he got my back,” O’Neal said. “I had contemplated suicide, in fact if I didn’t have Patton, I’m’ not sure I would be talking to you right now.” Brandt “Guardian Angles is here to help because dogs aren’t here to judge. “If you drop something on the ground and need it picked up for the 100th time that day that dog does not care, it is a game and that dog is happy to do it, they just need a little love and praise,” Brandt said.

Patton does more than help O’Neal with her depression.  “He’s an excellent listener, He keeps me distracted in overwhelming environments, he alerts me when my blood sugar is too low or too high,” O’Neal said. One Christmas Eve, O’Neal was at church and she noticed Patton kept putting his head on her knee and his tail was wagging. She tried several times to get him to sit down but he wouldn’t.  “I was thinking maybe it’s not him, it’s me not him,” O’Neal explained. “I checked my blood sugar and it was extremely high so once I took my insulin, he was fine. He alerted me by the change and smell of my skin because of the increase sugar level.”

O’Neal told WANE 15’s Briana Brownlee that she decided to join the military to help pay for school and the opportunity to travel across the world. Now that she is doing better mentally, she is proud that she served her country.

Karen and Patton are one the hundreds of  teams we’ve paired in 29 states across the nation. Our dogs save & change the lives of their recipients, by allowing them a beautiful New Normal that restores dignity, freedom and independence to their lives. If you would like to donate to, or fundraise for Guardian Angels so we can continue providing these incredible, individually-trained dogs to deserving applicants on our waiting list, simply click fill out the form below. 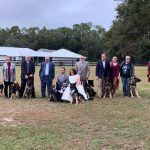 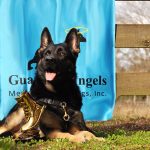